(Ed. Note: It goes without saying, but some may find spoilers in here, despite them not being blatant. You have been warned.)

What's Great: A continuation of the great story so far. It escalates fairly quickly, but it gets just as shocking as the last two chapters, so it definitely keeps you on your toes. Just like in the last episode, prior events do shape how things change and proceed, so you may want to freshen up on your decision choices before plunging into it.

What's (Not So) Great: The story's escalation. In the second chapter, shit didn't happen until later in the tale, whereas here, it goes down within the first 30 minutes or so. I still find issue with the controls (moving the cursor with the right-stick, and making decisions with the face buttons isn't exactly prime, nor is using the D-Pad for choices as an alternative, forcing you to move away from the left-stick). Some of the reaction times during fights seem to have been shortened, so you may find yourself dying more than you did previously.

Bottom Line: The entire story arc is getting better, with some of the side-stories either coming to a close, or escalating beyond belief. During the first hour or two, I had Ron Burgandy's voice calmly saying: 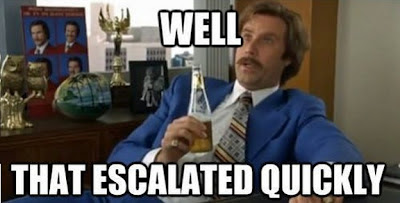 The game is getting better, what with twists and turns become more prevalent. The ending wasn't as shocking as the last, and there was more "to do" than there was story, but it still has me anticipating Episode 4.

(Played the entirety of the Episode. Kind of hard to tell you what I did, considering that there's not much branching off you can do.)
at 5:36 PM