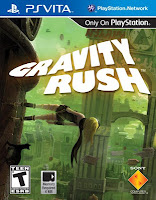 What's Great: The gravity controls are somewhat difficult to master, but once you do, you end up flipping and flying throughout the game, and that feeling of just going anywhere you want - literally, anywhere - is remarkable. Despite being able to just fucking fly everywhere, the level design is very intricate, even thought the main job (that I've been able to discern) is to hide the power gems and warp points. The various nooks and crannies, combined with tunnels, underground passages, hidden areas reachable only by gravity manipulation, the seemingly random staircases, the world itself has an interesting high level of detail, with all things considered

What's (Not So) Great: The camera can be wonky, especially when following Kat on a rough surface, such as the side of a building with jagged levels of windows. Combat isn't friendly early on, as once you start learning new moves (Gravity slide kick and the spin drill attack) it becomes confusing on how to properly implement them, but you will eventually get the hang of it. Unfortunately, until get the hang of combat, the clunky camera can make combat fucking horrendous.

Bottom Line: Gravity Rush is a game you should play on your Vita. It's on par with Uncharted: Golden Abyss in terms of execution of a new game on new hardware, as these are, quite possibly, the best games on the system to-date. That may change come this holiday season, but if you want a game that's going to make you regret buying the system less and less, you have to play this game.

(Played the game to it's completion, story wise. Earned a 58% of Trophies collected (2 being Gold), going out of my way on various occasions to grab those shiny fuckers known as Power Gems. Killed only one Rare Nevi and earned 'Top Cat' Trophy; that's the full respect of the townsfolk.)
at 11:07 PM