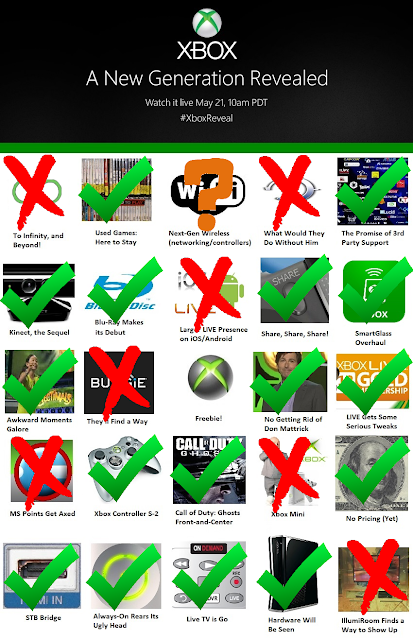 Your Xbox conference is done with.

Regardless of how you enjoyed it, here's the results of our bingo results for Microsoft's conference.


Asides from our misses, used games will play in some capacity. Microsoft did talk about 3rd party games, despite showing only one. They couldn't shut up about the new Kinect, but did skip right over official Blu-ray support. Sharing is something they loved mentioning, and the SmartGlass overhaul made it's debut. While not immediately evident, Microsoft has been battling a PR nightmare over contradicting statements, causing nothing but awkward moments across the internet. Don Mattrick couldn't resist being there, and LIVE did get it's upgrade in the form of 300,000 servers. The new Xbox One controller was shown, and quite possible, was the best thing to look at during the whole thing, even better than the purported "next-gen" tech going into Call of Duty: Ghosts. They're not ready to talk pricing, but they're sure finding a way to get you to not give you their money by hammering on about the cable bridge support, quasi-always-on requirement, and live TV support. It wouldn't have been anything without a subtle stab at Sony by showing the system off first thing in the conference.

E3 is now just over 2 weeks away. Microsoft is battling an uphill battle, with a good portion of the gaming community even considering the Wii U as something they'd want to buy, considering it doesn't have an always-on requirement, it can play used games, and there's no privacy concerns regarding a camera with a built-in microphone that's always listening.
at 12:28 AM