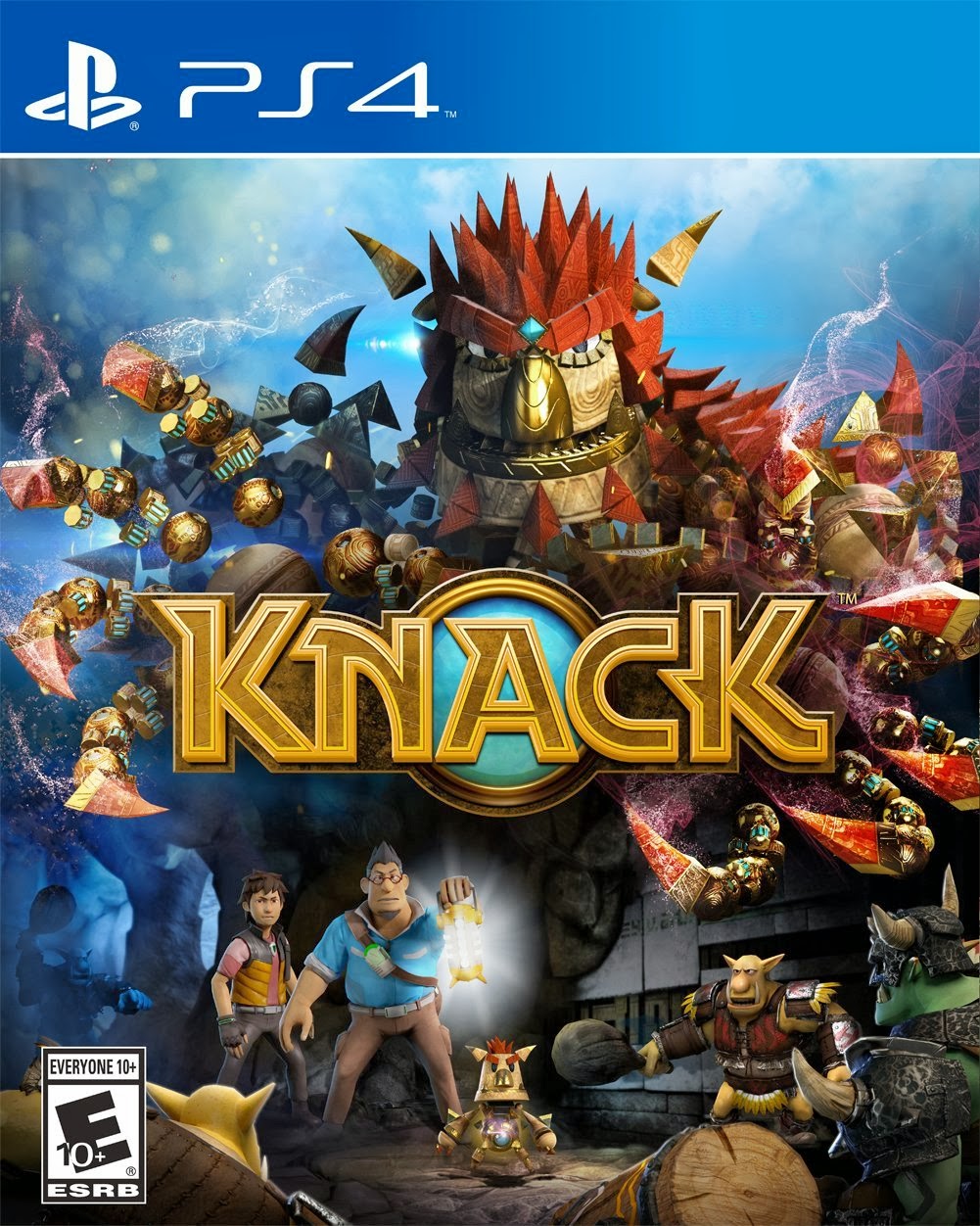 Ed. Note: Reviews aren't back (seeing as the last one I did was November of 2012). It's just...goddamn, this fucking game.

Holy fucking hell, one game should not be this infuriating, this difficult, this...insanely designed to the point of making me want to shout from the roof tops:

"Mark Cerny should be forbidden from making games forever."

Knack is exactly that. It's one game that has so many flaws, it's remarkable to believe it came from the same man who worked on franchises known industry wide. Where Knack falls apart is the horrible combat and platforming segments; essentially, what you do as the player in this game.

The controller uses only three buttons: cross, square, and circle. Jump, attack, and invoking your special attack, respectively, are the only things you are allowed to do in this game. Your special attack is merely a modifier, in that it opens up to use square, circle, and triangle for some pretty devastating attacks (whirlwind, shockwave, and ranged attacks, in that order). While Knack's attacks are simple and straight forward, the actual "fighting enemies" bit is disastrously broken.


You have enemies ranging from pill bug to goblin piloting a mech suit. To start you off, I played Normal. That's it: normal. The amount of times that I had a full health bar and was decimated in just one single hit are too many to count. This wasn't from your power enemy, oh no. This was from a piss-ant sized goblin carrying a wooden hammer. In just one swing, I watched Knack shatter into a thousand pieces, strewn across the environment. I do have to admit, it appears Cerny knew people would be dying very often, as respawning is almost instant (something else I need to talk about, as well). Those same enemies have their power attacks, as well, which may as well be Cloud wielding his Omega weapon and using Omnislash to completely fuck you up; there's effectively no coming back from it. With either attack, if you're jumping around or moving about - even slamming the right stick to dodge - these enemies character models will pivot on a fucking dime to follow you mid-swing. Hell, even those with ranged attacks (arrows, missiles, energy blasts) will be able to follow you with expert precision down to the draw of the trigger. No one single enemy in this game should be that good at aiming.

Getting back to respawning: checkpoints are effectively worthless, as you find yourself repeating large areas of a map, and your sunstone energy (for the piss-poor amounts you earn) isn't "restored" to the levels it was prior to dying. Your gadget and crystals that you manage to find inbetween deaths are saved, so no need to go barreling through a destructible wall to pick it back up. Your sunstone energy remains at it's current level (for better or worse) and enemies come right back in their original numbers. For someone who prides themselves on time management, watching your progress come crumbling down with each, well, crumble of Knack's body, it's disgusting.

Platforming in this game is a laughable feat. Too often do I find myself have to double jump on to ledges that come to Knack's knees (not Omega Knack, just baby or pre-teen Knack). His model is well above the platform edge from a single jump, but he just can't seem to get his body over the invisible barrier. Even the complete opposite is true: double jumping to a ledge with just a hair of room will put him on the ledge. This proves to be all too frustrating in intense moments where you're being followed by some entity with a vengeance for autonomous building blocks.

The characters and the story are laughably flat and hold nothing unique. The professor, his assistant (Lucas), and the assistant's uncle (Ryder) are all different people, but are nothing worth desiring to know more about their backstory. While not being the worst characters in recent history, they don't do much to add to the world of Knack. Even Knack himself - pardon this terrible pun, please - has enough holes in him that he comes across as plain. The story is even worse: the professor finds and harnesses an orb, which ends up becoming Knack. Goblins have broken a truce and began attack human civilizations, to which the professor takes it upon himself to unleash Knack on them, only after proving himself in an obstacle gladiator rumble against Viktor's robots. Viktor, if the spelling didn't give it away, quickly becomes the villain, as Knack defeats his robots, which he billed as the only way to defeat the goblins. As if the entity of Knack didn't make enough sense, you have...this.

For a game that's billed as a family friendly game to play, it's no wonder why kids aren't destroying their controller (heh) in pure rage. I 'bout tore my controller in half I was so fucking irritated with this game; I heard it creaking and cracking under pressure as I twisted it in frustration. That's on me, but I have not been this pissed at a game that's this light-hearted in a very, very long time. Considering I only spent $10 on this thing, I'm not too upset at a loss of cash. I got to chapter 7-1 (taking out anti-aircraft towers) and I had to stop this game. Not just stop as in "take a break." No. I mean all-out, flat-out, stop playing the fucking game and put it back on the shelf. Why did I get that far getting this frustrated with the game? It's like a pile up on the highway with two of the cars engulfed in flames and a white sheet laid over a few bodies; it's so fucking bad, you can't stop yourself from getting more of it. How's that for a Stanism?

Cerny described Knack as "a little bit like Crash Bandicoot, and a little bit like Katamari Damacy," with "a touch of God of War in there." While close, I have a better analogy: Jak & Daxter meets Dark Souls. Yes. I just made that analogy. Deal. I have to say, the game in itself is not a 100% absolute waste of time. It's enjoyable to point of masochism and sadism, but only if Dark Souls is leaving too much mental anguish behind. Maybe...90%?

I will not be revisiting Knack in the least bit, not until Cerny decides "You know what? We fucked up. Here's a patch to tweak difficulty, fix AI, implement checkpoints that work, and fix sunstone energy."

Of course, that will never happen, so...fuck it?

(I bought the game for $10 through Sony, played on normal, and got to the point of nearly breaking my controller and demanding Cerny himself reimburse be for a DualShock 4.)
at 10:08 PM