I've already said my peace on what I expect from Nintendo. While it was a bit outlandish, at the core, it speaks the truth: new franchise entries (Metroid, Zelda, Star Fox), exclusive titles, both new and old (Bayonetta 2, for starters), Majora's Mask 3D (just so that corner of the internet can shut the fuck up), overhaul of what Nintendo Network is capable of doing, and a massive Virtual Console flood of titles, with better pricing. Despite my wet dream being outlandish, there's a lot grounded in reality, and quite a bit of it is what I fully expect from Nintendo next month.

They need to show they're not fucking around anymore. They keep saying they're not directly competing with Microsoft and Sony, but you're in the same business. You cannot rest on your laurels, because those achievements - while respected industry wide - are not doing shit for you now. 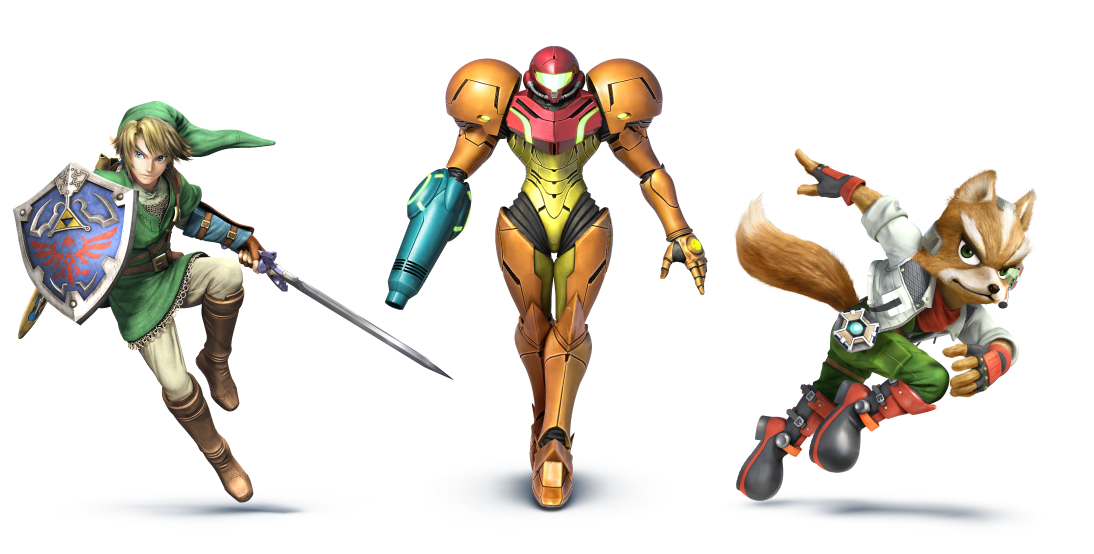 There are three franchises I fully expect to have a showing at E3, be it an HD compilation, or a brand new entry. We all damn well know a brand new Zelda game will be at E3. There will be a trailer, gameplay, a title, and, in the very least, a release window of Holiday 2014; there's no doubting that.

It's been far too long since we've seen Samus, so a new Metroid game is also expected, but we won't see it until Holiday 2015. I find myself in a predicament when it comes to who I want to make a new Metroid game; I'm effectively at a cross-roads. I don't want Retro on it, as the core members of the Prime team has since disbanded, and you can find members across the far reaches of the industry. Then again, I would like Retro to make it, as there are people still there from the Metroid Prime days who know how to build a solid game. Wanna know who is for a Retro-led Metroid Wii U game? None other than Miyamoto himself.

Nintendo should make the attempt to really shine with it's new "third party licensing" business model, and let someone else make Metroid (that isn't Team Ninja). A traditional, 2.5D game was fun to play, but they didn't care for Samus. The same gameplay can exist, but what about a third-person adventure game? Perhaps Retro can live out their original vision.

There could be an HD collection of the Metroid Prime Trilogy for release this year to at least satiate fans, and after the success of Wind Waker HD, Nintendo is keen to the idea, but doesn't want to waste it on in-house teams.

It's been even longer since Fox McCloud appeared, so new Star Fox is fully expected, with the earliest release being this holiday; very possible, but it's pushing it just a bit. Just give us a pure vehicle-based Star Fox, and you have a winner. No Adventures sequel. No half-assed on-foot missions. I want a Star Fox 64 successor in every meaning of the phrase. Hell, for a mini-game idea: use the touchpad as if you were General Pepper with the Cornerian army, using it to send out orders to a fleet of Arwings, like the Kenway's Fleet missions from Assassin's Creed IV: Black Flag, but you know, better.

These are three of Nintendo's biggest franchises, and despite Mario Kart coming out at the end of the month, I don't expect it to sell the systems that Nintendo expects it to. You put these three out on the Wii U this holiday, and you can sell

I'd like to see Majora's Mask 3D to be finally revealed. I've said this countless times, but the only reason I want it to finally be announced is so Project Moonfall and the entirety of this circle jerk can finally shut the fuck up about it. It's annoying and pathetic. I would like to replay Majora's Mask with some new glitz and glamour, but I want a new Zelda game, not an over-hyped entry in the franchise.

Nintendo needs to show the future of what the Wii U is capable of. A preview of system features and functionality would be nice to see, especially since the only updates to the system are simply boot times and read speeds of games. If that's the only thing you're working on, it shows both weakness in the system and lack of innovation. For starters, where's our TiVo support? Let's bring the GameBoy Player into the new generation, and allow you to play 3DS games onto the Wii U. You know what, go the complete opposite: use the 3DS/3DS XL as a pseudo Wii U GamePad. Your friends can sync it to the system, and use it as their own GamePad for multiplayer; I'd rather not lug around a GamePad and have to sync and re-sync it between multiple devices. Let's see some system bundles that don't inflate the price. Mario Kart 8 was a great start, but let's go further. Do you know how you sell units? Package in Smash Bros.; systems will sell.

We saw a glimmer of the future with DS games being released via Virtual Console to the Wii U. While this is a bit weird - handheld games on a console service - it does make sense. The titles announced so far, while some are pretty legit, a good handful of them are incredibly weak. Nintendo needs to blow the doors open on the Virtual Console, and just start throwing titles into the service on a more frequent basis. Since Balloon Fight was released in January of 2013 (the first of the service), 87 titles have been released to Virtual Console. It's been a year and a half since it was released, and we're getting - on average - one game a week. For a digital distribution service whose sole purpose to exist is to relive old games, I find it incredibly hard to believe that Nintendo, with as padded a wallet as it has, takes this long to get digital titles of old games released, especially when the Virtual Console the Wii was saturated with titles. Get a team dedicated to the service, and start pumping out the games.

Speaking of Smash Bros., I want a full roster reveal. Give us every character the game will have, and I want actual release dates for both 3DS and Wii U versions. A proper name would be nice, as well.

Nintendo Network needs an overhaul. A stronger connection between the 3DS and Wii U would be fantastic, and an easier way to manage the titles you purchase through the eShop. Nintendo's DRM is the reason why I refuse to buy digital titles through them; locking your purchase to the hardware - and not your account - is irresponsible, and further shows Nintendo's ignorance with online capabilities. Miiverse needs to have more functionality, including the long-promised mobile app (that isn't a direct copy of the web app) and a system-wide achievement system. Some believe this will detract from the value of games, and people will play a game for all the wrong reasons. I disagree. Well thought-out achievements will have a gamer - who is going after them - to explore more of the game, rather than simply do the main story/campaign, then give up. You're not forced to explore, but there's more incentive. Also, bragging rights.

Microsoft totally called how Achievements would be a staple of the industry, and Sony's Trophies are just reinforcing that, which evolved with a level system and Platinum trophies. Nintendo, get crazy with this. Offer achievements for your games. Offer the ability to cash in your achievements for Coins on Club Nintendo to buy shit. Sony's doing it with Gold trophies on an auction site. Make your own Platinum trophy - let's call it a 1-Up - and offer exclusive rewards that can only be earned by redeeming 1-Ups. That one is free, Nintendo; use it.

I want to see what Nintendo has been doing with that new third party marketing team they hired. I want to see new TV spots they plan to air that will help to reinvigorate the Wii U name. Nintendo needs to show exactly how they're going to appeal to the masses, their established fan base, and the Wii owners, and what the Wii U does for them.

Renaming the system to something that actually resonates with what the system is. "Wii" worked because it was different. People think the Wii U GamePad is simply an accessory for the Wii. Can you blame them? The Wii and Wii U look identical, and Nintendo's horrible methods of education aren't helping. Going from "Xbox" to "Xbox 360" worked because: 1) they didn't add a letter to the end of the original name, 2) the new system didn't look identical to the old one, and 3) they had stronger marketing for the new platform. Sony is even easier; they're just adding a new number to the end of the platform. It's incredibly easy to market "PlayStation 4" as a completely new system, separate from the "PlayStation 3".

I'm completely down with calling it the Nintendo HD. The strongest card in your hand is your very name. Nintendo dominated when it used it's own name as the platform title. Nintendo Entertainment System (NES). Super NES. Nintendo 64. But then things got weird. It was now called the Nintendo GameCube, probably because of the GameBoy, they'd keep the 'Game-' prefix, but the name backfired. The Wii was also a horrible name. We don't think about it now, but it's still a ridiculous name. The Wii U is even worse. Name it what it is - Nintendo finally going HD - and leave the entirety of the "Wii" in the past.

Nintendo has already announced cheaper hardware for emerging markets (read: China), but they've also hinted that they're already working on new hardware. While it's highly unlikely they'll say anything this year, a mid-cycle refresh is plausible (meaning, sooner than the 6-7 year interval that is the norm). The 3DS could use a internal upgrade, but a brand new handheld is less likely (but a 3DS lite is somewhat likely). The Wii U is too under-powered compared to PS4 and Xbox One (yes, it's still powerful, but major studios are ignoring it because of this), and the system simply can't do what Nintendo wants it to do; 2 GB of RAM is pathetic. Beef it up, slap "Nintendo HD" on it, and do the impossible: survive in the home console market.

Microsoft is up next. Will Master Chief appear this year? What about software updates on the system? New configurations? What will they do?!?!
at 4:12 PM